On Tuesday 17th February 2015 Nicola “Barracuda” Bresciani returned to Union Island for one night, upon invitation from the management of the Anchorage Yacht Club for an evening of music and reconnection.

Barracuda and his keyboardist, Micah Mathura from Gouave Grenada, entertained fans at the AYC some of which did not hear him play in over 14 years. It was truly a night of reflection as old fans and other musicians were busy chatting about the “ole days” after his gig.

His return to the Anchorage is part of a strategic plan by management to return the establishment to its former “glory days”. 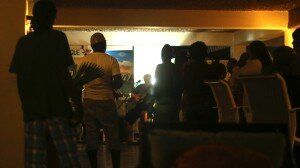 Patrons at the Anchorage

“I have known Barracuda as a close friend, he told me about his history here in the Grenadines. When I told him I was taking on this project he was excited for me. I wanted to bring him here for New Years Eve but it wasn’t possible. I had to take the only date he could give as he’s very busy in Grenada.  I thought it was a nice thing for Union Island people to have again one of its greatest performer from the past. Hopefully we will do it again.” stated  Natale “Nat” Talmo, Manager of the AYC.

The name “Barracuda” is well known to residents of Union Island as he played at different spots such as the AYC, and other restaurants between the years 1991 to 2001. His deep reggae voice and magical guitar strum combined left persons in awe.

In an interview with Radio Grenadines “Barracuda” related that after playing in Union Island for about 10 years he moved to Grenada where he continued in the entertainment business. “the ten years that I played in Union Island was Fun Tastic” he said.

Born in Italy he came to the West Indies in 1979 visiting St Barts and St Marteen, he then moved to Carriacou in 1986/87. He settled in Union Island during the years 1991-2001 after which he moved to Grenada. 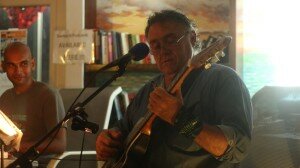 Barracuda and Micah Mathura on Keyboards.

Apart from being an accomplished musician, Barracuda is also a Skipper and Diver and as a result got the name Barracuda.

Being in Union Island last Tuesday Barracuda was able to reconnect with old friends. “ those days in Carriacou, Union and the Grenadines are the best years of my life, so it’s always a joy for me to come up the islands, I am an Islands boy.” Barracuda stated.

Barracuda is back to his busy schedule being booked almost all week between Carriacou and Grenada.