Another Vincentian to receive the Queen’s Young Leader Award. 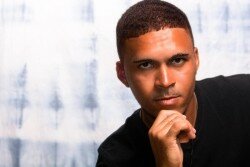 Dillon Ollivierre of Bequia, St Vincent and the Grenadines is one of the 60 young persons from across 45 commonwealth countries selected to receive The Queen’s Young Leader Award.

The Queen’s Young Leader Award recognises and celebrates exceptional people aged 18-29 from across the Commonwealth, who are taking the lead in their communities and using their skills to transform lives.

Winners of this prestigious Award will receive a unique package of training, mentoring and networking, including a one-week residential programme in the UK during which they will collect their Award from Her Majesty The Queen. With this support, Award  winners will be expected to continue and develop the amazing work they are already doing in their communities.

In a recent facebook post he said “i intend to use this achievement as motivation to continue to be the change I want to see in the world”.

He added “I’m extremely thankful for the support i receive on a daily basis from my parents, family members, friends, My Rise Up Bequia Team, The S.D.A Primary School staff especially Pastor Holder, and everyone who takes the time out to encourage me on my Journey”.

He went on to say “this award is for you Vincentians! It is a testimony that dreams can become a reality. To you the man, woman, boy or girl who feels success is too far, success is closer than you think remain committed to your goals. Vincentians! This place where we live is our home, let’s continue to develop it. Let’s continue to build our country and move forward”.

As a teacher Dillon tries to inspire young people, both in the classroom and beyond, to become model citizens. As well as discussing the concerns of his students with them.

Dillon is a poet and has written about a number of issues young people face, such as suicide, domestic abuse and crime.

He is also the director of an NGO called “Rise Up Bequia Inc.”, which was set up to help people affected by the country’s 2013 floods.

The group organised a concert to raise money for the victims and provided children with school supplies. Members also held a Talent Expo where participants had the chance to perform with established local artists.