Buried Alive – a story of how 135 turtles were saved. 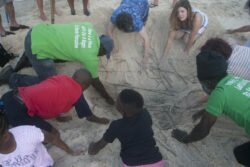 David and his wife Ingrid along with their daughter Gemma and her husband Paris were all guests at Palm Island, an exclusive, private-island resort located at the southern tip of St Vincent and the Grenadines. They had an encounter with nature which will remain with them for a long time.

Here is Ingrid’s story from Wednesday 10th January 2018, also included are notes from the editor.

A hawksbill turtle had laid eggs on the beach later than normal (November). The area was cordoned off and a sign posted, this was on Palm Island – West Beach.

We saw the Environmental Attackers on the beach around 4.30 pm, they explained that it had been 61 days since the eggs have been laid and the babies hadn’t emerged.

The concern was that they had hatched but were unable to reach the surface. The Environmental Attackers team was led by Roseman Adams. While we dug along with his team he told us all about sea turtles and how they were endangered and could be protected. 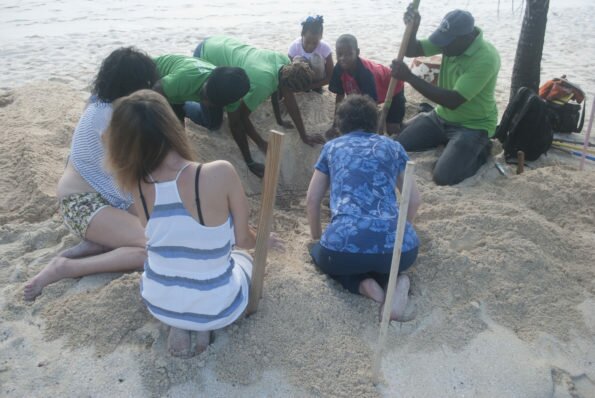 [Only 1 in every 1000 baby turtles will survive after hatching, they are hunted by other animals as well as us humans]

We dug for a long time without any luck, the hole got bigger and bigger with no sign of the baby turtles. We decided to try in a different direction although by now there was concern that the nest may have been poached.

Suddenly someone from the Environmental Attackers shouted that he had found something. The babies had hatched but due to root growth around the nest they had not been able to get to the surface… all the babies were alive. 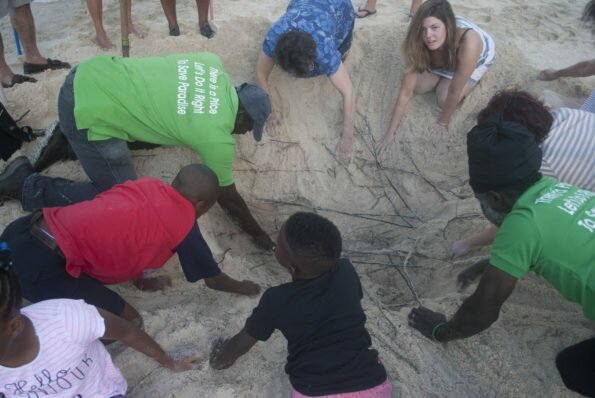 One by one we took them to the sea and washed them, then brought them back and placed them in a container. At first, they were not moving but after being washed in the sea they really woke up and were ready to go. 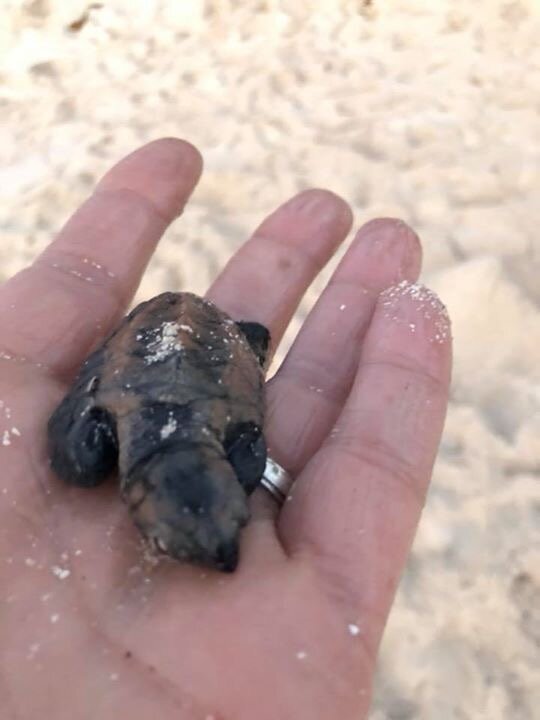 The team allowed us to help count them, 135 were accounted for with 9 eggs that hadn’t hatched. The unhatched eggs didn’t have baby turtles in, they had not developed.

Under the cover of darkness, we took them down to the water’s edge and released them.

Using red lights, the team guided the babies to the sea, some guests from the island stood behind to block any artificial light that may have distracted them, the babies raced for the sea and we watched happily as they disappeared into the surf.

We learned a great deal about the conservation of turtles in this region from the very special encounter, it was a wonderful experience thanks to the Environmental Attackers team for letting us help.

The Environmental Attackers is a Community NGO based on Union Island, several members of the group are well trained and certified turtle handlers. The group was the first to introduce community turtle conservation to SVG, they are on a mission to save the environment.