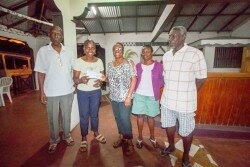 The Union Island Development Group (UIDG) received a significant boost on Thursday, January 28th 2015 by way of a cheque for US$1500.00 equivalent to about EC$4,000.00 . The UIDG is currently raising funds that will go towards the fencing of the Clifton and Ashton Cemeteries.

The cheque was handed over during a small meeting by Ann Hendricks on behalf of the group “Friends of Union Island” based in North America & the UK. Mrs Hendricks stated that her group decided to assist when they heard about the project by the UIDG and thought that it was worthwhile and will enhance the community and the Island as a whole.

Mrs Stephanie Browne received the cheque on behalf of the UIDG, she thanked Mrs Hendricks and her group for the funds which she say will further strengthen the UIDG in its mission to fence the cemeteries. 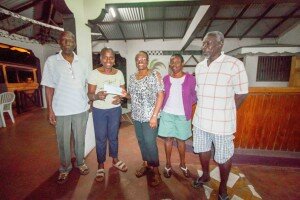 Ann Hendricks (Second From Left ) hands over the Cheque to Stephanie Browne flanked by other members of the UIDG.

The Friends of Union Island overseas based group have contributed to the Island over the past years. They helped to raise monies to construct a Morgue which replaced the old one, they also funded a playground with facilities in Ashton for children in 2015.

Click Here to Read More about the Friends of Union Island

Over the past few months the Union Island Development Group has been trying to raise funds to undertake their project, they organised concerts, Bar B Ques and other events on Union Island.

Persons who wish to contribute to the UIDG Fencing of the Cemeteries Project can do so by contacting the following persons: