Saint Vincent and the Grenadines is an island country in the Lesser Antilles chain, namely in the southern portion of the Windward Islands, which lie at the southern end of the eastern border of the Caribbean Sea where the latter meets the Atlantic Ocean.

Its 389-square-kilometre (150 sq mi) territory consists of the main island of Saint Vincent and the northern two-thirds of the Grenadines, which are a chain of smaller islands stretching south from Saint Vincent Island to Grenada.

To the north of Saint Vincent lies Saint Lucia, to the east Barbados. Saint Vincent and the Grenadines is densely populated (over 300 inhabitants/km2) with its 120,000 people.

Its capital is Kingstown, also its main port. The country has a French and British colonial history and is now part of the Organisation of Eastern Caribbean States, CARICOM, the Commonwealth of Nations and the Bolivarian Alliance for the Americas.

The island of Saint Vincent is volcanic and includes little level ground. The leeward side of the island is very rocky and steep, while the windward side has more sandy beaches and bays. The country’s highest peak is La Soufrière volcano at 1,234 m (4,049 ft).

While the official language is English, most Vincentians speak a creole language known as Vincentian Creole. Standard English is the language used in education, government and other formal domains, while Vincentian Creole, commonly referred to as ‘dialect’, is used in informal situations such at home and among friends.

We enjoy a tropical climate with the hottest and most humid months between June and September when temperatures reach an average high of 30°C (86°F). The most popular months to visit are between December and May when the climate is more comfortable, though trade winds provide a welcome breeze all year round. The driest months are between January and May and the wettest month is July. There is a theoretical risk of hurricanes between July and November though they usually pass to the north of our islands.

The water is safe to drink.  Bottled water is also available.

Driving in St. Vincent & the Grenadines is on the left. Visitors are required to purchase a temporary licence for EC$65 and must be able to produce a domestic driving licence.

Our official currency is the Eastern Caribbean Dollar (EC$). It is also the official currency of Anguilla, Antigua & Barbuda, Grenada, St. Kitts & Nevis, Montserrat, Dominica, and St. Lucia. Notes are in denominations of EC$100, EC$50, EC$20, EC$10 and EC$5. Coins come in denominations of EC$1 and then 50, 25, 10, 5, 2 and 1 cents. The US dollar is widely accepted throughout our islands and the exchange rate is fixed at US$1 = EC$2.68. Exchange rates with other international currencies are variable.

Visitors to St. Vincent & The Grenadines must be in possession of a valid passport and a return or onward ticket. Visas are required from nationals of The Dominican Republic, Jordan, Syria, Lebanon, The People’s Republic of China, Iraq, Iran and Nigeria.

A Departure Tax of EC$40 (US$15) per person must be paid by all visitors who have been in the country for 24 hours or more.

All visitors, with the exception of Caricom residents, are normally granted a four week stay by Immigration. To further extend this duration, visitors need to seek approval from the Immigration Department, along with payment of an extension fee of EC$25 per person.

Duty Free Items: The following items are duty free but must be fully declared:
baggage and household effects including:
wine or spirits not exceeding one quart in all;
tobacco, not over half a pound;
cigars, not over 50 in number;
cigarrettes, not over 200 in number;
used implements, instruments and tools of profession, trade, occupation or employment.
Personal Effects: Jewellery, binoculars, cameras, sports requisites, laptops, toys, medicines, and toileteries for personal use only.
Restricted Items: Drugs, spear fishing equipment, arms and ammunition.
Firearms: Licensed firearms must be declared and are subject to immigration and police regulations. An application must be made to the Commissioner of Police for a local licence. The authorities will seize undeclared and unlicensed firearms. 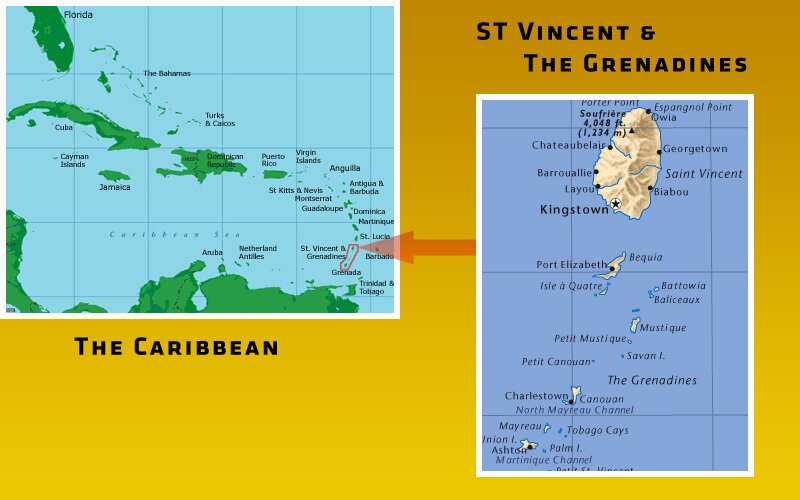