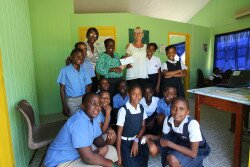 The Palm Island Resort through its Management gave monetary donations to three schools on Union Island on Tuesday 13th September 2016.

Owner of the Resort Mr. James Lane was represented by a two member team from the Resort, Katie Rosiak, General Manager and Melissa James, Property Accountant, who visited the three schools. 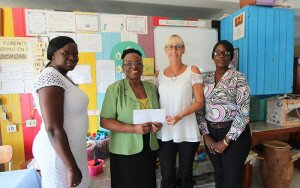 Katie Rosiak (right) hands over a cheque to Stephanie Browne.

The team handed over a donation of EC $1000.00 to Mrs Stephanie Browne, Founder of the Clifton Pre-school. The team then journeyed to the Stephanie Browne Primary and handed over EC $1500.00 to Lorette James, Principal of the school. The Mary Hutchinson Primary was the last stop where they met with the Principal, Ms Claudia John and handed over EC $1500.00. During the visit the team interacted with the students and staff of the schools.

“The funds will support of the many activities organized by the schools and we wish them continued success in all their endeavours” Katie Rosiak told Radio Grenadines.

“We continuously strive to be supportive of the many students of Union Island who are also the children of our hard working staff at the Resort as such Palm Island has once again reached out to the Schools to assist with any needs they may have” said Rosiak.

For several years now the resort has contributed to “Hands Across the Seas” which is a non-profit entity that provides a variety of books and reading materials to the school libraries.   The Resort also provide monthly contributions to the school feeding programs which allows the schools to provide meals for less fortunate students and affordable prices for others.

Palm Island Resort has always been committed to assist the residents of Union Island particularly in the areas of education, sports and culture.  They have contributed to entities such as Union Island Easterval Committee, Southern Grenadines Basketball Association and Pan against Crime to name a few. However, their main commitment lies with the education of the youths within the community to aid in their development as outstanding young men and women. 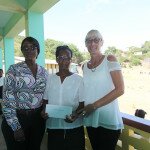 Meeting with Principal and Students of the Mary Hutchinson Primary 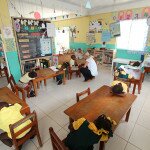 Katie Rosiak at the Clifton Pre-school 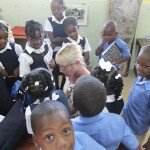 Katie Rosiak with students at the Stephanie Browne Primary