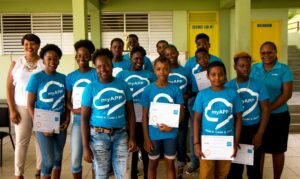 The NTRC partnered with Radio Grenadines in July 2017 to bring the “My App” Summer Program to Union Island.

The objective of the NTRC’s MyAPP summer program was to teach participants between the ages of 13-18 years who may or may not have previous exposure on how to code and design mobile applications.

The Summer Program commenced on July 24th, 2017 at the Union Island Secondary School and ended on August 18th. The students attended classes Monday to Friday between 9:00am to 3:00pm .

During the one-month program, students learned android mobile app development under the guidance of Mr. Cyron Cyrus from the NTRC. Java code was the main programming language used and by the end of the training, each student developed a fully functioning app.

All about the NTRC My APP Program on Union Island where 18 students were engaged in mobile software development over a 1 month period. Like and Share. #android #apps #mobileapps #java #javacoding #youngsoftwaredevelopers #stvincentandthegrenadines #unionisland