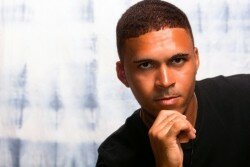 From a small but beautiful Island in the Caribbean, a young man’s ambition to contribute to the development of his country and be a part of a movement that has the vision, passion, commitment, drive and leadership skills needed to create positive changes in the world is slowly taking shape. Boldly, he has broken his shell and stepped out of his comfort zone to join youth leaders from across the globe who share the drive to serve, simply because they believe every youth must be granted the opportunities needed to live healthy, happy and productive lives. 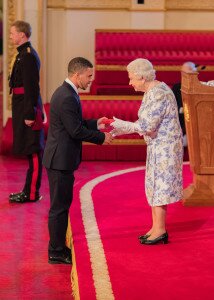 Dillon Ollivierre receives his award from the Queen.

Dillon Ollivierre, the 2016 Queen’s Young Leader from St. Vincent & The Grenadines, recently had the honour and privilege to be a part of a one week residential program in the United Kingdom for taking the lead in transforming the lives of others in his community. While there, he got to network, attend sessions geared towards strengthening his leadership skills, meet influential leaders and receive his award from Her Majesty Queen Elizabeth II.

Ollivierre discovered his poetry talent in 2005 while attending the Bequia Seventh Day Adventist Secondary School. A few years later, influenced by his understanding and value of life and love, he realized that the youth of his country needed a voice. This prompted the poet to be vocal on issues such as domestic abuse, violence, suicide and bullying. Being vocal on domestic abuse and violence earned him commendations by  Prime Minister  Dr. Ralph Gonsalves and Then Opposition senator Anesia Baptiste during a budget presentation in the house of parliament.

Ollivierre’s voice was being heard loud and clear by both youth and adults. He now needed to prove that he wasn’t just a speaker but a doer of what he promoted. His words needed to be complemented by action. This led him to be a part of a march against crime and violence as well as visit Schools on the Grenadine Island of Bequia to share his motivational poetry with the students.

In December 2013, a flood affected St. Vincent; homes were destroyed and families lost loved ones and their belongings. The young activist became part of a group that organized a successful drive for food, clothing and water for these affected people. Early January, Ollivierre was invited to help put together a concert to raise funds to benefit students affected by the flood. The group stuck together and Rise Up Bequia Inc was formed; a social activist Not-for-profit organization-which focuses on building and strengthening core ideas and practices of sustainable community development, education agency and outreach. As a founding member and director of this organization, Ollivierre’s drive to help climaxed. Since December 2013 Rise Up Bequia Inc has provided assistance to the less fortunate students and partnered with the Kerosene Lamp Foundation and the Epatoma Foundation to paint, clean and do landscape work at the Bequia library. The group has also provided funding to a cancer patient and has held two 8 successful Talent Expo’s, which provided a platform for young people to nurture and develop their talent as well as showcase it alongside established acts in the creative industry.

The passion and drive Ollivierre posse continued blooming in 2014 when he became St. Vincent & The Grenadines young national poet of the year for his poem ‘suicidal’ which portrays a person on the brink of taking their own life. In 2015 his quest for knowledge expanded as he attended a resilient livelihood program which focused on empowering youth and strengthening resilience for climate change and risk reduction. Following the program Ollivierre took part in a coastal mitigation project which sparked great interest and concern for the environment. He wrote and produced a spoken word video called ‘I will be the Change’ which cemented his desire to contribute to climate action which is the 13th sustainable development goal. The poem calls for everyone to be educated and committed to climate action.

Currently The Queen’s Young Leader is promoting his new spoken word  video called  ‘A Clean,Beautiful and Healthy Environment’ which features his fellow Queen’s Young Leaders. The video encourages grassroots action to reduce littering across our global communities. Ollivierre will be travelling to Ottawa Canada in September to attend ‘The One Young World’ Summit then head to Grenada for a summit being organized by Queen’s Young Leader Ali Dowden. However, before he leaves he plans to organize a school’s independence activity in Bequia and be a part of a school’s visitation program to speak on keeping our environment clean, beautiful and healthy.

Ollivierre is a graduate of Adventist education on the Grenadine Island of Bequia and credits, God, both the primary and secondary institution for the role they played in his development and his parents Lucien and Donna Ollivierre for their commitment towards his development. He is also a graduate of the St. Vincent & The Grenadines Community College Division for Technical and Vocational educational.

Ollivierre ends by thanking all family, friends and well wishers for their support and leaves this advice for young people as being “The person who prevents us from achieving our goals is our self .Too often we focus on the negatives and things we have no control over. When we truly realize our potential and decide to stay focused and committed we begin to soar like eagles for the authenticity of who we are is revealed and immediate connections are formed. Connections which materializes into opportunities to not only develop ourselves but the people we represent. I have doubted myself too much. I have rejected opportunities due to fear of failure. I grew impatient of waiting but I learnt to be patient, to stay focused and to remain committed but most importantly to trust in God. You, too can learn these lessons and be successful and believe me when I say you can contribute to the development of your community and country, you can inspire others.

Philippians 4:13- I can do all things through Christ which strengthens me