Mustique, May 20, 2014 – Six divers went lionfish hunting at Petit Canouan and got 43 big ones in a single 42 minute dive. “The dive at Petit Canouan was spectacular,” said Glenroy Adams of Grenadines Dive. “There are plenty of lionfish there and they are large but we had a good team to battle them.” The dive was one activity in the lionfish tour of the Grenadines organized by the Mayreau Regatta and Sporting Committee, together with Grenadines Dive.

“Truly, the success of our lionfish tour of the Grenadines has been built on the expertise and cooperation of local folks on each island where we’ve stopped,” explained Nancy Saul-Demers of the Mayreau Regatta and Sporting Committee. “On this occasion, following advice from local fishermen we headed to Petit Canouan. Our three divers were joined by Mustique harbourmaster Berris Little and Brian Richards and Corney Ollivierre from Mustique Watersports. The Mustique Watersports dive boat was ably captained by Raymond Dewer, who dropped us at just the right spot. Then teamwork really paid off with us spearing, on average, a lionfish per minute.” The largest fish was 15 1/4 inches long and weighed in at 1.75 pounds. “We had to measure several big ones to determine which was longest as many were quite close in size. We haven’t seen so many large ones all in one spot before.”

All of the lionfish were used to demonstrate safe handling and filleting for chefs, fishermen, workers and visitors. At the same time, Nancy Saul-Demers explained that lionfish belong in the South Pacific and Indian Oceans and began to invade Atlantic and Carribean waters after being released from a Florida aquarium in the mid-eighties, arriving in waters around St. Vincent and the Grenadines in very late 2011 and early 2012. “We have the great advantage of being able to learn from other countries that were invaded by lionfish many years before they arrived here,” said Saul-Demers. “We know that regular culls are effective in managing the lionfish population and giving local fish a chance.”

“This species reproduces very rapidly, with two million plus eggs laid by a single female in just one year, and they’re greedy predators of our local fish, lobsters, shrimps and so on, so they’re a threat to our tourism and fisheries industries,” said Saul-Demers. The good news is how delicious lionfish are, as testified by the 83 folks of all ages who stopped by the Mustique fishermen’s village and quickly consumed meals featuring lionfish taken out of the water just hours before. “We’re very grateful to Mustique Villa Manager Darnley Hazel for all his efforts to organize our community barbecue. While we’re encouraging fishermen to hunt lionfish, we’re also encouraging restaurants to serve them and encouraging both locals and visitors alike to eat them at home and ask for lionfish dishes at restaurants. As many folks say, we have to eat them to beat them.”

Mayreau held their first annual lionfish derby in 2012 and since then they’ve continued annual derbies, held regular lionfish hunts with Grenadines Dive, written and performed an educational play, done school presentations, worked with the Tobago Cays Marine Park to organize the first-ever Union Island Lionfish Derby, served up their first annual lionfish cooking competition and tasting and hosted a workshop on making jewellery from lionfish spines, tails and fins. The group is grateful to the United Nation’s Global Environment Facility Small Grant program for enabling this expansion of their efforts to manage the lionfish invasion.

On Sunday the Road Jump up started on the road at around 5pm with Dj Hype and High Voltage longside the CubbyHole man “miamore” leading the T Shirt Band with patrons wearing their “Down In a Cubby Hole” T shirts.

The Union Island Carnival 2012 was organised by the Music Festival Committee of Union Island.

May 1st was an exciting day for the children of Canouan when they were treated to a day of fun by Uncle Mac of Canouan Sol. Food and drinks were served and they participated in many activities, which it appeared, were thoroughly enjoyed by the children and adults alike. Activities included; beach races, tug of war, lime and spoon, turtle race,crying and dancing competition and hoola hoop. There was also a huge bouncing castle which took the center of attraction.

(FOXNEWS.com) Skywatchers take note: The biggest full moon of the year is due to arrive this weekend. RG Note: (Don’t forget the catch the action at the JTPro Center aka Union Island Kite School, Bungalo Union Island for this Full Moon Party) http://www.facebook.com/jtprocenter

The moon will officially become full Saturday (May 5) at 11:35 p.m. EDT. And because this month’s full moon coincides with the moon’s perigee — its closest approach to Earth — it will also be the year’s biggest.

The moon will swing in 221,802 miles (356,955 kilometers) from our planet, offering skywatchers a spectacular view of an extra-big, extra-bright moon, nicknamed a supermoon.

And not only does the moon’s perigee coincide with full moon this month, but this perigee will be the nearest to Earth of any this year, as the distance of the moon’s close approach varies by about 3 percent, according to meteorologist Joe Rao, SPACE.com’s skywatching columnist. This happens because the moon’s orbit is not perfectly circular.

This month’s full moon is due to be about 16 percent brighter than average. In contrast, later this year on Nov. 28, the full moon will coincide with apogee, the moon’s farthest approach, offering a particularly small and dim full moon.

Though the unusual appearance of this month’s full moon may be surprising to some, there’s no reason for alarm, scientists warn. The slight distance difference isn’t enough to cause any earthquakes or extreme tidal effects, experts say.

However, the normal tides around the world will be particularly high and low. At perigee, the moon will exert about 42 percent more tidal force than it will during its next apogee two weeks later, Rao said.

The last supermoon occurred in March 2011.

To view this weekend’s supermoon to best effect, look for it just after it rises or before it sets, when it is close to the horizon. There, you can catch a view of the moon behind buildings or trees, an effect which produces an optical illusion, making the moon seem even larger than it really is.

Pictures from the Karib Cable Annual Kite Flying Competition, held on the 25th March 2012 at the Park Bay, Bequia. 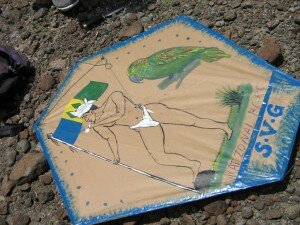 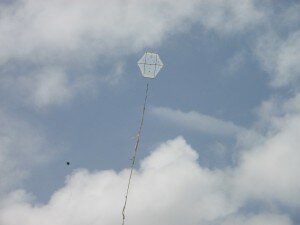 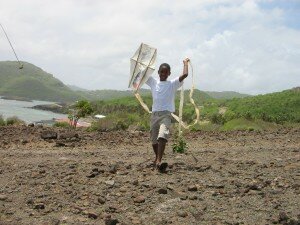 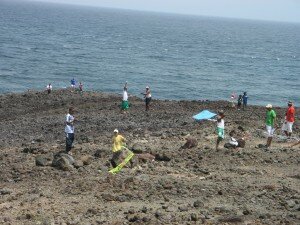