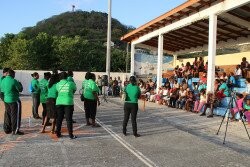 The project comes under the theme: “Increasing water storage capacity on Union Island, Adapting to the effects of drought Phase 2” and will deliver, free of cost, 55 (1000 Gallons) plastic water tanks to residents who meet the criteria. The selection process will be overseen by a steering committee and several areas will be looked at such as number of persons in a household, income, existing water storage capacity, location.

There are also a few Wells that are used for washing alone due to the high salt content of the water. During the periods of low or no rainfall persons can purchase drinking water for up to EC$200.00 for a 900 Gallon fill up.

The “Water Tank ” Project was funded by the GEF Small Grants Programme UNDP in partnership with the Australian Government Overseas Aid Program (Australian Aid). The Project falls directly under the newly implemented Community-Based Adaptation (CBA) programme with the objective to improve the adaptive capacity of communities and to reduce their vulnerability to the impacts of climate change.

The goals of the CBA programme are three-fold:

• To reduce the vulnerability and improve the adaptive capacity of local communities to the adverse effects of climate change and its variability;
• Provide countries with concrete ground-level experience with local climate change adaptation;
• Provide clear policy lessons and mainstream CBA within national processes and upscale practices across scales. 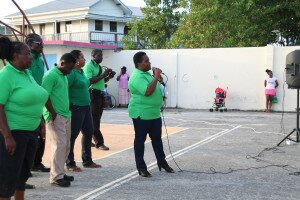 Speaking at the launch was Katrina Collins-Coy, President and founder of the Environmental Attackers. Coy in her remarks gave an overview of the project which she said will comprise of two training workshops, construction of concrete platforms for the tanks and the delivery of the tanks to successful applicants. At the end of the launch persons will be able to obtain and fill out application forms, Coy said.

Coy stated that a Phase 1 of the project was funded by the Canadian International Development Agency (CIDA) where 100 (1000 Gallons) water tanks were given out to residents in 2013.

Hayden Billingy, National Coordinator of the Global Environment Facility, Small Grants Programme UNDP for St Vincent and the Grenadines gave remarks at the launching. Billingy stated that with Climate Change there will be an impact in terms of the duration of rainfall that the islands will receive. He further stated that GEF, SGP UNDP is very proud to be associated with the project and to work with the Union Island Environmental Attackers.

Before closing the ceremony, Katrina Collins-Coy explained the application and selection process to the persons gathered, explaining how the application form should be filled out.

Residents can see the tanks being delivered before the end of 2016. 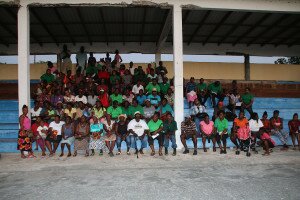