Union Island, St Vincent and the Grenadines, Monday 5th September 2016 – The Mary Hutchinson Primary School started the new school year with a church service and Badge presentation ceremony at the Union Island Seventh Day Adventist Church. The church service which started at 9am opened with a prayer, the national anthem after which songs and scripture readings were heard. 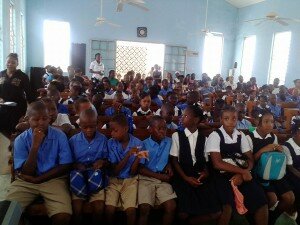 School Badges will now be part of the school’s uniform. The concept for the new school badge was decided upon after several meetings with persons in the community. The final design was approved by the school and embroidery of the badges was funded by Fitzgerald Hutchinson, son of the late Mary Hutchinson which the school was named after.

The Principal of the Mary Hutchinson Primary, Claudia John, in her remarks said that every school term will begin with a church service so that students can draw closer to God. She thanked Mrs Adams (District Officer) and other persons who were responsible for designing the Badges. 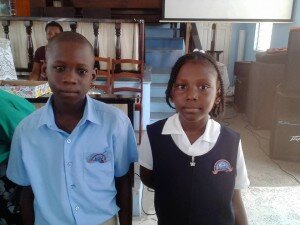 John told the gathering that a portrait of the late Mary Hutchinson will be placed at the school as part of the ongoing face lift for the school.

In addressing the students, John stated that she will be hard on certain things such as elaborate hairstyles at the school, she stressed that students should dress as children and not adults.

John also stated that the wearing of ribbons will be encouraged and a “school haircut” for boys. She said that students must obey the school rules and be disciplined, focused and must read alot.

Words of encouragement was delivered by Pastor Daniel who told the students a story of the Frog who was deaf hence could not hear all the negatives being said about it. He encouraged the students to strive for the highest that they can reach.

Fitzgerald Hutchinson a businessman and son of the late Mary Hutchinson gave brief remarks and shared a bit of history on his mother who was born in 1939 and went on to be a Parliamentary Representative for the Southern Grenadines in 1989. Fitzgerald final advice to the students was “Wear your Badge with Pride”