Largest Mangrove Habitat in St Vincent and the Grenadines to be Restored. 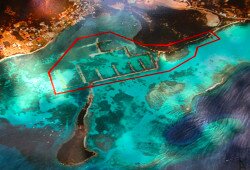 The Ashton Lagoon will soon be restored under a project recently launched by the Sustainable Grenadines Inc. (SusGren).

In 1994, the Ashton Marina Project proposed to construct a 300 berth marina, a golf course, and large condominiums in the same area but was abandoned in 1995. 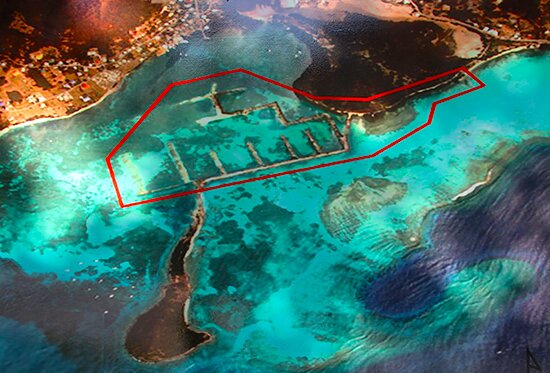 The lagoon once held beautiful coral reefs, fishes, mangroves, mudflats and seagrass beds that are now destroyed by the blockage of water circulation within the lagoon.

According to SusGren, restoration of the lagoon would allow for proper conditions to re-populate the area with these lost species and restore its important biodiversity.

The Area was designated an Important Birding Area (IBA) in 2008 and currently provides an important habitat for various species of seabirds, shorebirds, water-birds, and land birds.

Frigate Rock (Island) which is now part of the Lagoon was once separated from Union Island. The Islands were physically connected during the development which started in 1994. Frigate Rock is a National Heritage Site designated by the National Trust. 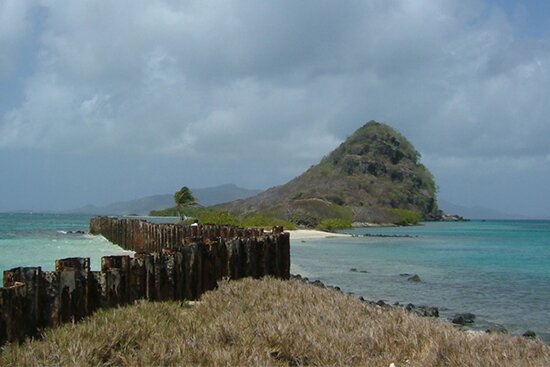 Frigate Rock in the Background. Photo from www.environmentalassociates.net

The Sustainable Grenadines Inc (SusGren), is a trans boundary non-governmental organization (NGO) which is based in Union Island. SusGren is currently working with several partners including The Nature Conservancy; The Phillip Stephenson Foundation; Birds Caribbean; The SVG National Trust; Grenadines Partnership Fund and several Government Ministries and other stakeholders to restore the Lagoon.

Susgren officially launched the project aimed at restoring the lagoon on Friday 18th September 2015 in the village of Jerome, Union Island. 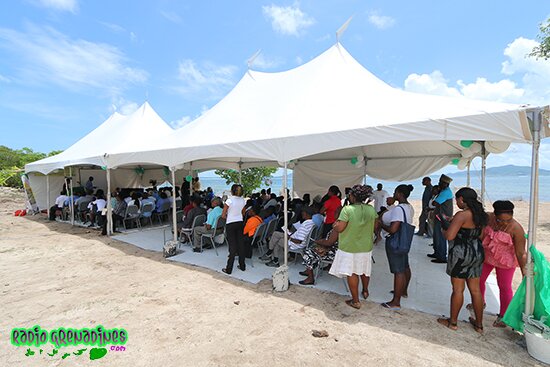 The Launching of the Project by SusGren.

Addressing the gathering was Mr Martin Barriteau, Special Advisor to SusGren, he described the lagoon as an important climate change mitigation mechanism that can protect the village of Ashton against the impacts of climate change such as sea level rise. 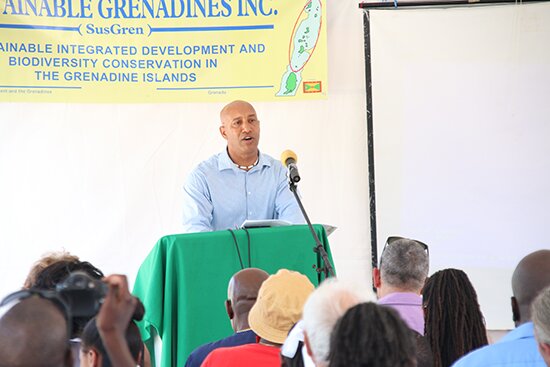 Barriteau stated that the lagoon is also important for livelihood and economic development such as seamoss farming and fishing grounds. Barriteau related that the area started receiving attention in 2005 when the birding group “Avian Eyes” visited the area. From then on several meetings were held, and a community mapping work (P3dm) was done.

In 2015 SusGren received approval from the Government of St Vincent and the Grenadines to conduct restoration work.

According to Barriteau, the project will receive funding from several organisations some of which are the Phillip Stephenson Foundation; GEF Small Grants Programme along with a sizable grant expected from the Caribbean Community Climate Change Centre.

“It took us maybe nine ten years working on this and it may take us another ten years to bring it to where we would want to go”. Barriteau said. 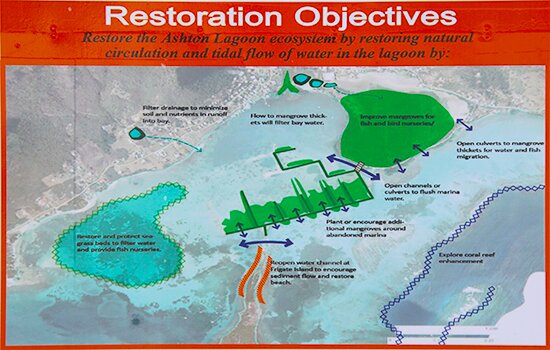 Arrow shows where openings will be made to increase natural circulation and tidal flow into the Lagoon.

The overall project goal is to Restore life to one of the lagoon environment, by improving mangrove habitat, coral reefs, seagrass beds & fish life whilst providing opportunities for sustainable livelihoods & development. This will be done by a series of objectives.

Objective 1:  Restoration of Bird Habitat: Begin to restore the Ashton Lagoon ecosystem by restoring natural circulation and tidal flow of water in the lagoon. The main objective of the restoration works will be to improve the circulation in the lee of the existing interlinking causeway. This is to be achieved by:

(1) removal/resetting of some of the backfill material

Objective 2: Monitoring and Evaluation: Monitor process of restoration of Ashton Lagoon ecosystems with emphasis on mangrove and salt pond habitat for birds, as well as associated biological and physical parameters critical to ecosystem approach to assessment and guiding adaptive management possibilities.

Objective 3: Community Outreach and Education:   Increase awareness and appreciation of the links between the environment and sustainable livelihoods and the importance of using our natural resources wisely among the general public stakeholders and government officials.

Objective 4:  Maintenance, Management and Restoration of Bird Habitat:  Develop sustainable local tourism and livelihood opportunities for local people. One of the main outputs of this         objective is to conduct local tourism workshops to develop community vision; identify attractions, stories, experiences and products; and create a draft interpretive framework—graphical representation of messages, experiences, and themes, ordered hierarchically. 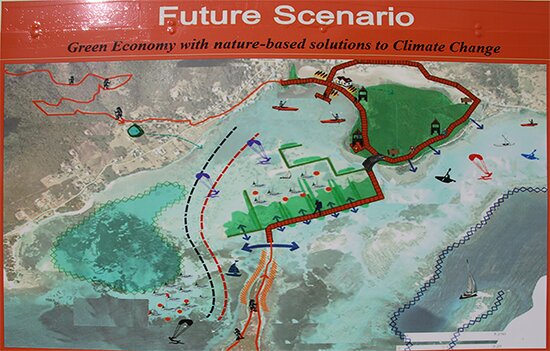 The Future of the Ashton Lagoon.

Several residents of Union Island shared their aged memories of swimming, fishing, boat racing and other activities that they once enjoyed in the Lagoon.

A presentation was done by the recently established Junior Rangers of Union Island and Saxophonist, Danny Alexander delivered a piece on his Alto Sax. 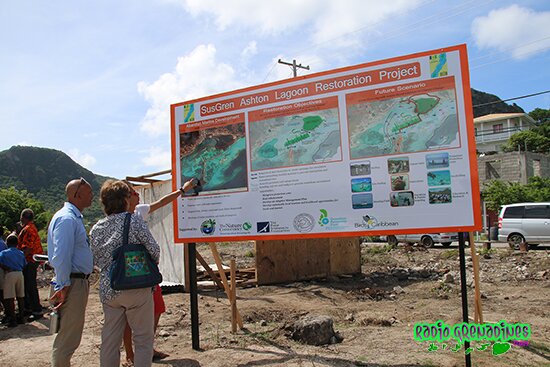 This Billboard showing design phases is now relocated to the entrance of the Lagoon.

At the venue there was a display of Seamoss products from the Mayreau Explorers Co-operative, persons were able to sample and purchase a variety of drinks and ice cream made from seamoss harvested in Mayreau.